Pizza by the Sea in the Press

Pizza by the Sea: This beach-town pizza company has a picture-perfect strategy for marketing to families

Pizza newcomers Jason and Kristi Beer focus on faith, community and the sunny side of life

“It’s a good thing Jason and Kristi Beer, owners of the three-unit Pizza by the Sea in the Florida Panhandle, like children—they’ve got a lot of them. No, they’re not one of those reality TV clans with 19 rugrats and counting. Only two children actually carry the Beer surname, but dozens more—often shirtless, barefooted and loud—can be seen running in and out of Pizza by the Sea on any given day, and, as far as Jason and Kristi are concerned, they’re all part of the family.Without resorting to giant mechanized mascots and noisy arcade rooms, Pizza by the Sea, which has two locations in Santa Rosa Beach and one in Panama City Beach, is easily one of the most kid-friendly pizza companies in the nation. Bright, colorful images of little ones dominate the company’s branding, particularly on its website and social media. The “Very Happy Meals” menu features kid-size pizzas—including cheese, pepperoni and a cheeseburger pie topped with pickles, ketchup and mustard—as well as spaghetti and meatballs and perhaps the simplest yet shrewdest menu selection you can imagine for children: a small plate of noodles and butter with a breadstick, sold for the same price ($4.99) as a plain cheese pizza….”

5 Family Restaurants in Florida. Check out this list of top places for a great meal when your kids say, “I’m hungry!!” -where food and play go hand in hand.

Pizza By The Sea by Anne Schults January 2013

Pizza By The Sea by Neville Carson March, 2009 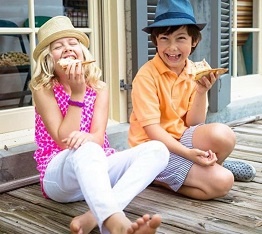 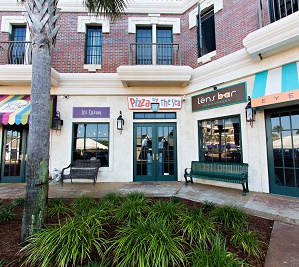 Receive our latest News and Promo's Join the Pizza by the Sea Email Club Today! Sign Up Now!

Stay up to date with our